MOVE Mobility is working on the final phase of the Comprehensive Public Transportation Master Plan for the Urban area of Ramallah-AlBireh. The assignment aims to prepare a Master Plan, formulated based on a detailed assessment of existing national and regional transport network and the results of a comprehensive analysis of existing gaps.

The project intends to respond to the needs of growing population and private sector for more sustainably and efficiently planned urban spaces and infrastructure. The proposed Master Plan will cover the urban area of Ramallah, AlBireh, Betunia, and Surda Abu-Qush. This area constitutes the major urban center of Ramallah-AlBireh Governorate and is located at the heart of the West Bank. Ramallah and AlBireh cities host most of the headquarters of the ministries and other national institutions and the offices of international agencies working in Palestine.

The area witnessed considerable socio-economic and urban growth during the period following the establishment of the Palestinian National Authority in 1994, where thousands of Palestinians moved to the area.. The rapid increase in population, as well as in vehicle ownership, and economic activities in the area have considerably increased vehicular traffic and as a result the area has high congestion. Traffic conditions have worsened despite the fact that the municipalities have implemented several road rehabilitation projects and traffic improvements in the last few year. 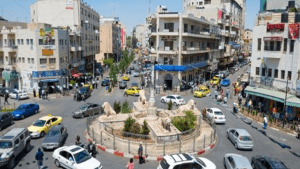 Together with our consortium partners Community Development Group (CDG) and National Center for Sustainable Development (NCD) we have successfully finalized the Inception phase, Data Collection, Analysis and Modeling phase. We now focus on the final stage: The Master Plan. Within a few weeks the final Comprehensive Master Plan will be finished and the proposed measures will be ready for Implementation.

The project is funded by Municipal Development & Lending Fund (MDLF) and is part of the Integrated Cities and Urban Development Project (ICUD).